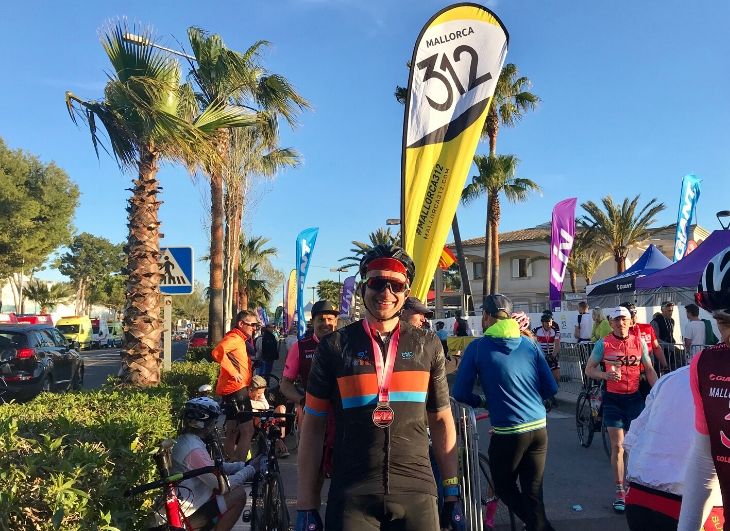 This is my favourite sportive and my second year of riding it so I now know what to expect so can hopefully complete it faster than last year. The event consists of 8000 riders tackling 15,000ft of climbing over 312km on closed roads. There are also options of riding 167km or 225km on the day tackling most of the major climbs which you can decide during the event or the decision can be made for you if you don’t make the cut off times.

The cut off times to complete this are pretty tight so getting to the start line early is important as you can lose 30mins getting over the line and despite being chip timed the time is taken from the gun time not your actual time.

Now having found myself in a “club 18-30” hotel I assumed they would not be serving breakfast at 5am so opted for porridge in my room and set my alarm for 4am. Getting up at this time and putting on sun cream in the dark is certainly an interesting experience but essential as it’s going to be a long day in the saddle!

I left my room at 5am and made my way to the start line and managed to get a front row spot and parked my bike ahead of the long wait. The guy next to me was much better prepared for the cold than me wrapped in a blanket and wearing a tracksuit. I did ask for a 2mm Allen key to adjust my Garmin mount but said ‘I’m not carrying anything, if I puncture, I’m out’. I later found out that he had won the 167, obviously couldn’t do the distance of the 312 😉

Gotta love the start of a large sportive with riders going off lightning fast thinking they are Bradley Wiggins but it is a long day and the key to any long Gran Fondo is save as much energy as possible at the start and stay safe avoiding any potential collisions, with this in mind I cruised to the first climb.

To reach the first cut off time you have to tackle 3 main climbs which for me being “slightly” heavier than the average cyclist is not easy but was pleased to cross the timing chip with plenty of time to spare which was slightly different to last year where I only made it by 4 minutes!

This is where the first feed station is and resembles feeding time at the zoo with utter chaos of bikes and people everywhere! I decided this year just to grab and go so filled every available space in my pockets with food and even found myself stuffing a ham sandwich down the front of my new “race cut” Ride Harder jersey!

Not being the lightest rider, I was pleased to see the back of the mountains and onto the so called “flat” second half of the ride which although looks flat on the course profile certainly is not and with a strong wind this year made it tough. I was a good wind break during this section and obviously made many friends as they all wanted to ride with me albeit tucking in behind!

There are plenty of photographers out on the course, although these seemed to always be after feed stations, or it was just that I was always eating? Not wanting another image of me stuffing a sandwich in my mouth I placed it in my jersey pocket, breathed in and smiled for the camera. Great idea I thought until I forget what I had done and found it sometime later, it was fair to say that this food option did not travel well in the 30degree heat!

This is the only sportive that I know of where the last feed station gives away free beer which I suppose works as an energy drink with all the sugar however I’m not sure it was the best idea with 30km still to go! It is like a party at this feed station and would be easy to get carried away, but I opted for water and made my way onto the last section which was pretty flat although a head wind, just like Norfolk!

I was happy to cross the line with 12 hours 29 minutes on the clock, which was 45 minutes faster than last year. Another great well organised event as always, bring on next year!