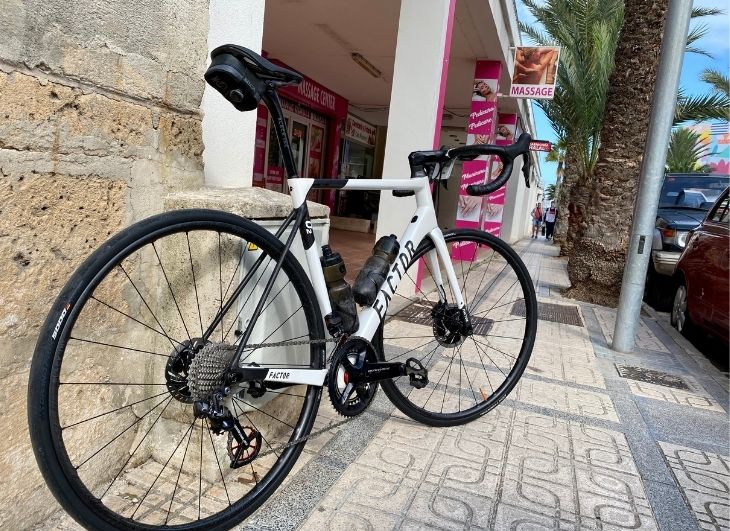 Flying can be stressful enough in normal circumstances but catching a 6 am flight during a pandemic certainly increases the stakes! So my alarm was set for 1 am after a busy evening of packing up the demo Factor bike which only arrived a few hours earlier!

There was no traffic on route so arrived at the airport with plenty of time which was much needed with all the restrictions in place and extra documentation that was needed. The first thing first was to get the bike box checked in with EasyJet and was surprisingly directed to a “real” person as the self-service would not be able to deal with me. Sort of the reverse from when you go to a supermarket!

Despite the Factor o2 coming in at just 6.9kg I was told that the box was 2kg over the weight limit! The assistant told me to take some stuff out and put them in my carry on bag. I can never understand this as the weight is still going on the plan so does it matter where it is. I am also sure there were a few people with an extra 2kg of body weight but they are not told to lose weight and come back! It was hard to find items that weighed enough but not that could be used to hijack the plan! I went for pedals along with a few bits n bobs and just snuck under the limit!

The flight actually left bang on time which must have been a first for a low-cost airline! A quick 2 hours later and I was safely in Palma airport. Anyone who has travelled with their bike will relate to the joy you feel when you see that box appear from the oversized luggage carousel!

After arriving at the hotel it was time to unpack the bike and start the reassembling process! The first thing I noticed when I pulled the bike out was that the rear mech wasn’t hanging straight. Even though deep down I knew this was serious I still thought maybe that’s just how they look on a disc brake bike! Sadly not as and it looked further I could clearly see bits of metal that should be joined together!

I have now updated my How to Travel abroad with your Road Bike blog with a very valuable lesson!

A couple of zip ties held it in place to allow me to ride to the bike shop with just one gear! After trying to explain to the mechanic at the shop it was broken but would not listen. He said many people say broken but just not set up correctly. Trying once more he got angrier proceeding to say “Who is the mechanic? I will tell you if it’s broken! I was mechanic for Fabian Cancellara for 10 years!”. He came back a few minutes later saying “Yes it is broken”.

The lady in the shop luckily had one to purchase which was a bit of luck due to the global shortage of Shimano parts! Not wanting to know the price I offered up my iPhone to the contactless terminal. I did ask for the Rob Wicks discount but said her English was not very good!

Being a bike fitter I can make small adjustments to the bike however the thought of fitting this to the bike with the Ceramic Speed arm was a little above me. Having some contacts over in Mallorca really helped and the guys at Velo Mallorca had it swapped over in minutes!

After a stressful first day and a rest day from training, I decided to lay in and have a relaxing morning. With the weather not being great, I thought this would be an ideal opportunity to go for a massage to flush the legs. Using the trusted Google I found one in the resort that I was staying in. As I walked in something did not feel quite right but the lady was nice and talked me into a 1-hour massage. There was no towel option to cover me and my boxer shorts were lower than I would normally have expected. She obviously did not appreciate I was an athlete and asked if I wanted a “happy massage”!  I tried to explain I was a cyclist with an event coming up but she did not understand!