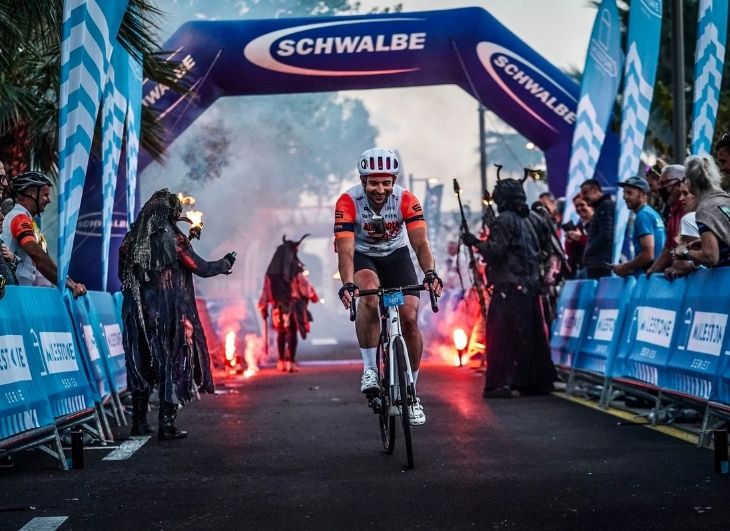 Well after all the issues with getting to the event, see my previous blog, I was pleased to wake up at 4:30 am and felt good! It is always an odd feeling putting on suncream at this time of the morning but highly recommended with being out in the sun all day!

The facilities at the hotel were not the best but I made do with what I had by eating a big bowl of cereal along with a Brioche bun filled with jam and a glass of orange juice!

The event start time was 6:30 am which was 30 minutes earlier than normal. It was not a sell-out this year and with there being wave starts I did not think I need to leave quite as early as in previous years. Obviously, everyone had read my Top Tips blog and had already started filling up by the time I arrived. Standing at the start was not helping my ankle which has now swollen up after getting bitten the day before by a horse fly! It looked like an elephants leg!

I only lost around 8 minutes at the start getting across the start line and made my way along the flat start section before hitting the first climb. The Coll de Femenia is the first climb that you hit and although on paper it looks the longest I always find this easier than it looks and you soon arrive at the top. A new sight that I have not witnessed before was a few riders with their phone pressed against the top of the arm. Who is the arm talking to I thought? Took me a while for my mind to register what they were doing. It was glucose monitoring using Supersapians.

The scenery is stunning and I was so pleased to be riding out here again and this time with disc brakes! The descending from the Puig Major resulted in the usual amount of riders that overshot the corners and end up in the gutter leaving some spare skin on the tarmac. Luckily they all had support from either other riders, the police or an ambulance.

As we navigated our way around the beautiful views of the Estellencs Coast I was pleased not to be riding a fully aero bike with 60mm wheels like many.  The crosswinds and those vertical cliffs did not make the best combination!

I have to always smile at the triathletes riding the event. You can always spot them as they have 2 full bottles on the bike along with 2 sticking out from behind the saddle and a couple of top tube bags! Don’t get me wrong it is always a good idea to make sure you carry enough nutrition but you don’t want to carry any additional weight up those climbs.

After another swift feed stop at Es Capdella, it was time to tackle the Galilea at around 140km! This is a double-peaked climb and although it is less than half the height of the Puig Major I find it the toughest of the day! The midday sun and over 5 hours of riding do not help! Could have been worse and missed the feed station like the guy I met halfway up! This climb has plenty of traditional switchbacks along with the odd mountain goat! I did not look anything like it as I continued to struggle up the climb! Next year I will look like him!

As you depart the mountains at exactly 160km it is time for a good section of downhill/flat and you soon make up some time. This is the chance to find a group, tuck in and rotate off the front. Unfortunately for me I only managed to find a Spanish woman who was pleased with the windbreak that I provided but was unable to return the favour!

My luck changed after some time when we got overtaken by a large group that we were able to hang onto. This was short-lived after taking a 90 degree left turn and losing the front wheel as a result of the dreaded puncture! Not wanting to panic I probably took longer than normal to change it. The polka dot green jersey brigade came past me without stopping to help!

This meant that I arrived at the 220km cut off point literally seconds after it closed. Being forced onto the 225 route I kept looking back and noticed others were still turning and going around the barrier. I went back and snuck around then did a solo TimeTrial effort to make sure I was not last! It was just like riding in the Fens back home with a headwind and 90deg turns!

I was pleased to arrive at the feed stop in Ariany to top up my nutrition. Asking if the sandwich was cheese the lady replied “only ham” in that English/Spanish language. I thought this was strange not having a vegetarian option so asked the next station and the woman said it was “only jam” in a similar accent. I thought that made sense and tucked one in my jersey to save for later. More coke and electrolyte fluid and I was on my way towards Arta.

This final section of the event always gets me. When you look at it on the elevation profile it always looks pretty flat but there are some really short, sharp climbs! If like me you carry a few extra kg’s then it really takes its toll. I am sure the elephant leg that I was carrying weighed extra and was not helping either! I would be riding at the front of a group then hit a bump and get spat out the back every time. I decided to eat my sandwich while riding on my own which had become a regular occurrence by now! Sadly the “ham” woman was correct so I ended up with just a slice of bread!

Anyone who has taken on the challenge will remember the party atmosphere when you hit the last feed station at Arta. Music, supporters and beer really make this a special moment. Once you get here it is pretty much job done with less than 20km to the finish line. Normally you would have a tailwind but this year it was a headwind.

Despite struggling to make the second cut-off it was great to cross the finish line and enjoy the amazing atmosphere with over an hour to spare!

Check out the strava route below