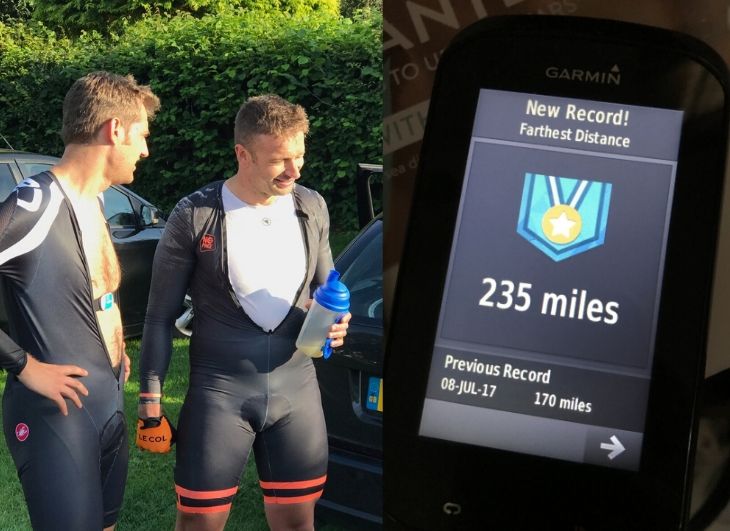 I’m not sure a 12hour cycle event can be called a TimeTrial but it exists in the TT calendar so must be correct?!

My alarm went off at 4.15am and quickly I heard the rain lashing down on my window and just remembered laying there and thinking  ‘great’. Anyway after a big bowl of porridge I found myself at the start line and ready for the off and luckily the rain had stopped.

It’s a weird feeling pressing start on your Garmin knowing that you have got 12 hours in front of you but on the plus side the intensity is that much lower than a normal race it actually feels easy at the start!

The majority of the ride was on the a11 doing multiple laps which is a fast section of road although can be busy with cars so you need to have your wits about you! I was lucky to have a friend supporting me so was able to top up with food and water on each lap and get moving on quickly.

Now my normal strategy is to wee on the bike to save precious time on shorter distances but at this event I treated myself to getting off the bike to use the facilities.

After 6 hours I had done 120miles and thought I’m on the home straight and with 6 hours to go I got my head down and kept going.

At the 9 hour mark the bike had become slightly uncomfortable and as I was spending less time in the aero position I decided to swap to my road bike which in hindsight was a great decision and was a breath of fresh air just to be in a different position.

I was then instructed to make my way to the finishing circuit which is a 10mile TT course where there are time keepers every mile recording your splits so you get an accurate time of exactly how far you travel in 12hours. I managed to pick up the pace at the end and gave it a sprint for the last few minutes only to find that my 12hour finish time ended up just past one of the timekeepers which meant I had to keep going to the next one as fast as possible for them to work out my exact distance.

I stopped as soon as I reached the next time keeper and found myself lying on the floor as I had been unable to get off the bike successfully! It is a funny feeling getting helped up by a lady who must have been in her 70’s but I didn’t care, I had completed the challenge!

The distance I covered was officially credited as 235miles so was super pleased for my first event!

Would I do it again? Well as with any long distance event the first thought is never again but that soon subsides and the thoughts start creeping in of how far could I go next time etc so I think I will be back!

A big thank you to my mate Alistair who supported me for the whole 12hours!