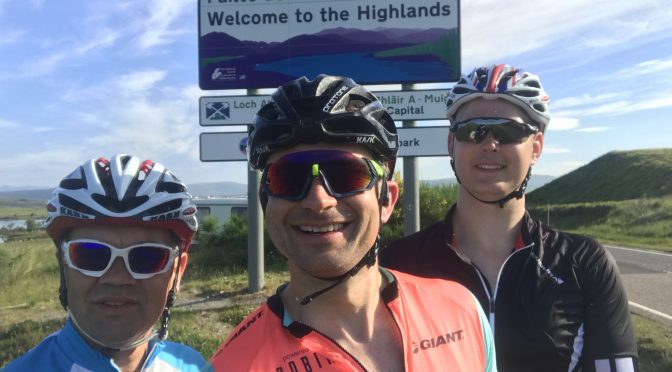 We decided to go for an early start this morning although due to a slight mix up between me and Rob as to who was in charge of setting the alarm it was not as early as it should have been! Alistair was already down enjoying the continental breakfast and his opening comment was “I cannot even touch my arse today”, we did think why would you even want to?

We left Steve at the hotel to go for his daily swim and wash in the loch. Alistair said it was like going on holiday with a hippo!

Today saw us travel through Glen Coe and the scenery was absolutely stunning although had to negotiate a few climbs but the view was worth it! The cars all seemed pleased to see us today as were honking their horns and waving there fists at us!

After our stop at Fort William we made our way onto loch ness. Robert had trouble with his own monster today as was complaining that it would just not sit right in his shorts.

Now the biggest challenge of the week was not riding to John O Groats but trying to get Alistair’s sunglass there safely. Robert managed to lay then on the floor and proceed to stand on them despite Alistair’s best efforts to worn him!

Now I have got away lightly this week with jokes being about me which is partly due to the fact that I am writing the blog but to keep the balance I thought I would include what happened to me tonight. I managed to pull in the local pub although the only problem was it was the wrong side of the border! I am putting it down to the pink T-shirt that I was wearing!

We have raised £1600 so far for EACH, so if you haven’t done so then it can be done here. If not for the children then do it for Alistair’s arse!