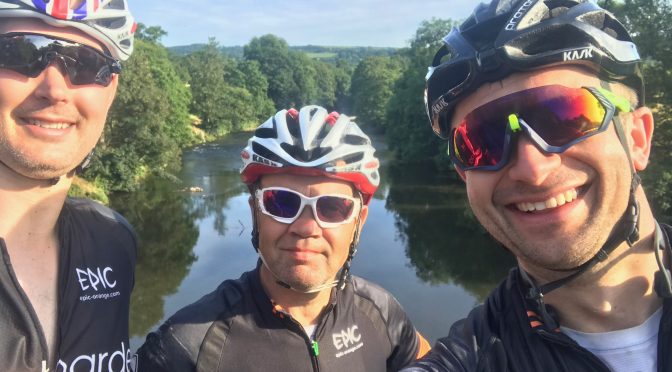 Well as expected Day 1 did not disappoint with being the toughest day of the trip! It is nearly 12am and I am only just getting round to writing this so I will keep it short today!

After the usual tech issues and obligatory photo’s at the start we set sail slightly later than planned however was glorious sunshine which made the views stunning!

They say “fail to prepare and prepare to fail” and that was the theme throughout the day due to our lack of studying the route in depth which resulted in a few wrong turns and not stopping for breakfast until 3pm and after 65 tough miles!

As the heat increased the hills got tougher and tougher, the forecast was low 20’c but after seeing the road melt away from under us a quick check of Garmin found it to be 28.8’c which was handy for Al not being a lover of the sun!

Something else I learned today was that for every picturesque bridge with a gentle stream of water flowing underneath would only mean one thing……. a bloody great hill immediately afterwards!

At the 100mile mark it became really tough as had climbed over 10,000ft and we were trying to find the most direct way to Oakehampton which was the destination of our first stop. Al was losing fluid and energy fast and decided to re group at the services and grab a drink along with more nutrition to keep us going.

Now we did not know the location of the Travel lodge that we had booked and had found out from Al’s father in law via text that there was 2 Travel Lodges in Oakhampton. We sat on the side of the forecourt fantasising of hot showers and food whilst trying to calculate how far we had to go which e came up with a figure of 8miles and decided that the quicker we get going the quicker we will be there. So fully fuelled we made our way all of 50 yards until I caught a glimpse of a travel lodge and decided to double check on Google that this was our destination! The ironic thing was we could see the building from where we were sitting. Anyway this cheered Al up immensely and may have just saved him from going into a very dark place!

Right Robert is fast asleep so that’s it for me for tonight!