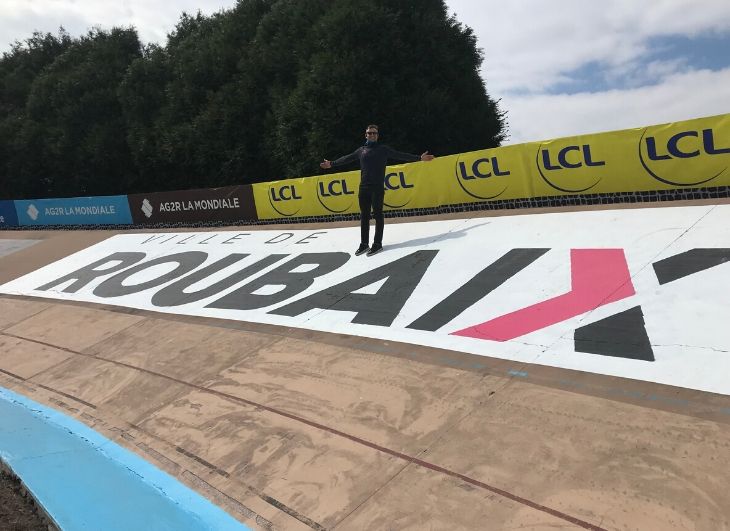 Growing up watching this event it has always been one for my bucket list and having cycled to Paris before I was really looking forward to riding through this amazing French capital again however, after a last-minute check of the route it appeared to start nowhere near Paris!

Arriving at the venue to sign on in good time, which is unlike me, we queued for the doors to open only to be told that they are delaying getting registered by 1 hour with no reason, this would only happen in France, probably be striking next!

Roubaix sounds on paper that is going to be a typical French town where elderly gentleman would sit outside cafes and drink wine whilst eating cheese with garlic round their necks but anybody who has been would know this Is far from the truth and reminded me of something like a cross between Milton Keynes and Bradford!

Now the problem with an event that starts in a different location to that of the finish is that you have to make arrangements to transport yourself and the bike to the start line which means getting up at some ridiculous time in the morning. I decided to join the masses and opted for the shuttle service which consisted of rows of lorry’s which luckily were accompanied by coaches for the riders!

The journey felt like lambs going to the slaughter as the procession headed out of Roubaix onto the quiet roads with the sun rising over the idyllic French country roads. As we approached the tiny village of Busigny the locals were awakening and watching the convoy roll in with a confused looks on their faces. I am sure they must have had an idea as to what was going on as did not look like they had just moved in!

The coach stopped in the middle of the road and it looked like we were going to be queuing to get to the start line but it soon became apparent that this was the drop point as the bikes just got passed out of the lorries to whoever was free to take them whilst others were using the onsite facilities of any tree or drain available!

Armed with my trusted Boardman bike kitted out with Hunt wheels and Continental GP5000’s in 28mm I was ready to take on the “Hell of the North”! There are 29 sections of pavement to take on during this 172km ride and after completing the first section you certainly find yourself counting each section down praying for each one to end!

It is hard to know what to do for the best when riding them as they are not exactly laid in an orderly sequence and you find yourself getting jealous of the lines that the other riders are taking and find yourself darting from one side to the other just to get on a section that looked flatter only to find no better than what you had! For those who can remember the game show strike it lucky where contestants would pick top, middle or bottom this was me at the start of each section but picking left, middle or right for my line and would then cross my fingers!

I was well warned and prepared for how brutal this is on your bike and made sure anything on my bike was the bare essentials and strapped down extra tight but couldn’t help laughing when I went past the “typical” triathlete with clip on aero bars and rear mounted bottle cages which were obviously empty!!

Now I thought I had been extra cautious with double taping my bars with gel inserts but saw a novel ideal if using pipe lagging which although looked funny I would have certainly swapped as I began to lose the feeling in my hands! By this point the 5mm was not quite enough to hold 88kg up and I found myself stopping after each cobble section to raise the saddle back up and used the universal hand torque setting of stopping when you hear the creak!

Each section of cobbles is graded 1-5star but to be honest I could not tell the difference with most of them but that was until I hit the 5-star section of the Arenburg which certainly deserved its award but not sure I recommend it!

Down in to single figures now and the end was in sight and I was certainly looking forward to the smooth tarmac of the outside Veledrome in Roubaix.  I managed to make it to the end with no mechanical issues which I was pleased with.

The event is certainly a must do for any keen cyclist and makes you really appreciate how hard it must be for the pros to race this as for me it was just about survival.

Would I do it again?  Well watch this space as you never know what is happening at Ride Harder in 2020 😉