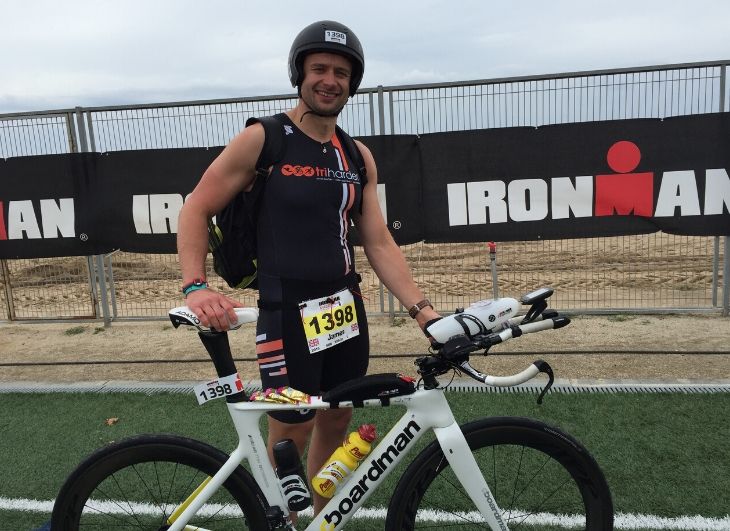 Well after months and months of training which seem to go on forever, race day was finally here. Luckily this event starts at a respectable time of 8.45 am which means no stupid 3 am alarm call so was nice to be able to get up just before 6 am making sure you have the all-important toilet stops pre-race!

Breakfast for me consisted of porridge with banana and a couple of slices of white toast with jam and of course a large cup of strong coffee! With all the bags packed and the bike racked the day before then its just a case of taking what you need for the swim down to the start line.

It was a lovely still morning with the sun just starting to appear on the horizon as the final checks were being made before transition closed. Once I got my wetsuit on it was time for my last Beet-it (which is a shot of beetroot juice in case you are thinking of anything else) and into the starting pen.

This event was a rolling start so you pitched yourself against your expected time which means there is a gentle flow of competitors entering the water meaning no washing machine effect at the start. I entered the water and got my head done for the long 3.8k swim taking it quite steady at the start. Now I’m pretty good at sighting so although I was keen to get on the toes of a faster swimmer to gain a drafting advance I was conscience to make sure I kept a tight line so that I did not do any extra distance. This meant that I did most of the swim on my own so was really pleased to get out of the water in 1.13  which for me was slightly above target.

I had a quick but controlled T1 making sure I had everything I needed before heading out on the bike. The first 3k was slow due to the speed humps and tight turns while we made our way out of Calella. The start of the open road begins with a few lumps and bumps but nothing too taxing and then its just pan flat. My target was to ride at 75% of my FTP which is 218watts as I was confident that I would be able to run off the back of that. It felt comfortable for pretty much the entire ride and I was able to hold the TT position right to the end which is something a large number of fellow competitors started to struggle with as the race went on. I made sure I kept my fluids up by taking on a bottle at every aid station but the downside of this meant that I needed a number of toilet breaks. I had already decided at the start of the race that I could not afford the time off the bike so had to just come to terms with doing it on the bike, after I had managed it 4 or 5 times if soon became the norm. One of the hardest parts about the ride was not drafting, not intentional but with so many riders on the 3 lap course there was plenty of traffic and at times some similar paced riders so this meant I had to push above target to get passed them. I finished the ride in just over 5hours and with a power figure of 74.9% of my FTP which put me in good stead for the run.

My T2 was one of my quickest although this was helped by the timing mat being just outside the changing tent. I still managed to get some vaseline on my feet before I put my socks on just as a precaution. My target for the run was to aim for around 10min/mile with no walking apart from the aid stations. I started out a little faster as knew I would slow so was hitting around 9min/mile, nothing silly just trying to get a few miles in the bank. The run was a 4 lap run of around 10k each so mentally for me I think it made it easier to know you were never more than 3miles from the finish line where the large crowds were located. I did not have the distance on my Garmin just my min/mile pace which slipped down to 10 and 11min/mile but was conscience not to push it and risk getting cramp and having to stop. The miles ticked off one by one along with the aid stations and soon found myself on the last return leg with the finish in sight. At this point, I was able to push harder and increase my speed knowing I was nearly there with no cramp, like the bike leg this just goes to show how it was a well-paced effort being able to finish strong. Some people may think that you should be literally on your knees at the end but for its all about pacing as if you get that wrong and end up having to walk/stop then you can lose far more than you would every gain by pushing harder.

I came across the line in 11hours 12min and was over the moon with my time. Its always an achievement completing an Ironman event with it being such a long day anything can go wrong but for me, it was pretty much a well-planned race in perfect conditions.

Now onto writing that ebook of “how to save 4 hours off your Ironman time”………..

Click here for your copy of my ebook ‘4 hours faster’