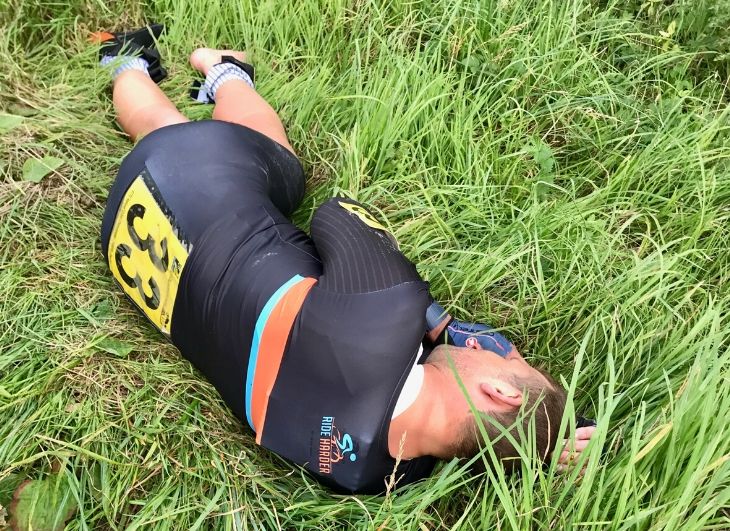 It was 2 years ago that I last completed this challenge where I completed 235miles and my target this year was 240+. The Forecast was not great ahead of the event with 18mph winds that were going to be a head wind for half of the course.

Arriving at the HQ

I arrived at the headquarters early so as to not have to rush and was due to set off at 6:33am. Having decided that any toilet requirements would be made in motion to save time I decided to have one last wee just before I set off so not to spend the whole 12 hours with a wet cycling pad. Unfortunately the zip on my suit came off and was unable to do it back up with just minutes before the start. Thanks to Rob and Paul for quickly repairing it with safety pins all the way up. Quite ironic really that my “no pinz” suit now looked more like a pincushion!

Anyway I reached the start and set off on time for what was going to be a very long day. They first few hours are lovely when you are fresh as the intensity is relatively low.  I had completed a good taper with plenty of carb loading in the lead up so I had plenty of energy!

I obviously had not positioned myself evenly within my skin suit as during the first wee I noticed that it was my left shoe that was filling up slightly!! This became my entertainment throughout the first half of the event working out what technique to use, seated or standing, downhill or uphill? It passed the time anyway.

It is always a little demoralising when the fast guys pass you but is especially so when Joe Skipper, who ended up breaking the course record went by and included slapping my arse!

One of my big tactics this year was to limit the time off the bike so my feed stops were every other lap and only stop for a minute. All the training on the TT bike had really paid off, as I felt good in position. Around the 8-hour mark it began to get a little tough with the relentless wind, noise and traffic but I stayed focussed. Although I felt like I could have easily got off and have a little nap which one rider actually had at one of the turnaround points, classic!

Onto the finishing circuit, which is a drag up to the start, I decided to swap bikes onto my road bike just to give me a bit of a boost. The plan was to then swap back however Rob did not quite make it in time with the bike so just carried on. By this time it is just about survival, everything hurts, it is hard to eat or drink anything and you are just looking at the clock.

I was relieved and pleased to finish with a distance of 246.89 miles and did not go any further other than lying in the exact spot I ended up on last time. “Wherever I lay my helmet that’s my home”

Thanks to everyone that helped, supported and congratulated me on this ride, It is amazing to have great support.

Link to my Strava file here

Check out the photo’s on my Ride Harder Facebook page

6 thoughts on “My second attempt at the 12hour TT”