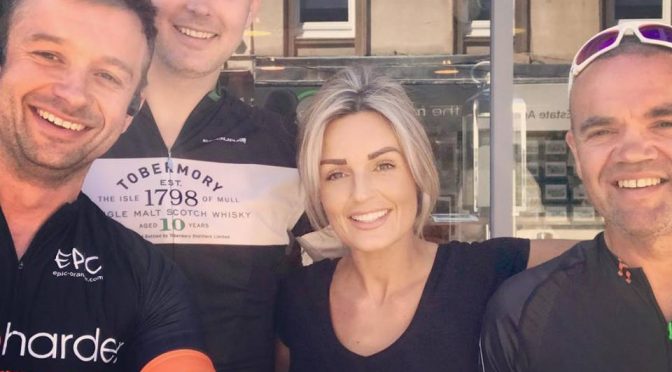 The topic we debated at breakfast this morning was why do they have square sausages up in Scotland but could not come up with any reasonable explanation in the end.

Robert is still struggling to get his brain in gear in the morning as left his glasses, well Alistair’s actually as borrowing them, at the B&B! Thankfully Steve drove back for us and delivered them back to us in the van Tour De France style. I’m sure Robert hung on to the van for a little longer than necessary up that hill, must be those “sticky glasses”!

You know you’re in Scotland when all you can see riding through the towns & cities are Tennet’s signs. Its a bit like the Scottish equivalent of the Golden Arches!

First stop of the day was at Hamilton where we found a lovely bike friendly coffee shop called “Time”. Scone’s had just come out of the oven and the staffs were very accommodating! Stacey was a little concerned for our butts after finding out how far we had cycled, luckily Rob refrained from asking for help applying the cream!

We had to navigate our biggest city of the ride being Glasgow next. With the weather still being amazing and riding through on a Saturday lunchtime there was even more sights on show. Riding through it seemed like we saw the whole of the university students on display starting their drinking session early. We were thinking the old guy on the mobility scooter from Warrington should move up here!

Alistair was starting to feel at home in the highlands as his descendants were from here; he has even got his own clan, Wallace tartan!

The road surface had not improved with big sections of chippings again today. Alistair’s hands had gone numb and could not feel to anything to change gear, looks like Steve has a night off tonight!!!!