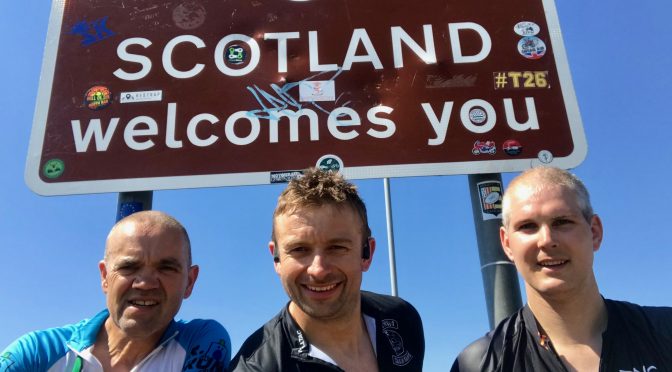 The mood in the camp this morning was mixed. Rob woke up and tried to get his brain in gear just to get himself dressed, I was trying to book the next night’s accommodation and ended up ringing up the same B&B twice only to be told again they had no availability!

The focus of today was getting over Shap pass which is a 9mile climb totalling 1,200ft. Alistair’s arse was still a little bit sore and we made a slight adjustment to the position on way up which seemed to help.

The weather was still hot today but got away with saying it was only 24’c today although was actually 28’c. I had to smile when Alistair said it feels hotter than that!

We managed to reach Scotland today which was a welcomed sight on all counts. As we went through Gretna Green Robert was deciding on who to marry, Billy or Patrick but ended up going for his bike!

The bulk of today’s ride ended up being beside the M6 on an old A road which was obviously re-surfaced when times were hard as they removed every other chipping to keep costs down! Rob ended up on the path and I tried the wrong side of the road just to get something that resembled flat!

Poor Alistair had mechanical issues today so gear changing was not overly smooth. The only consolation was that it stopped him moaning about his arse!

Back to just sleeping with Robert tonight, night

Check out the ride below!