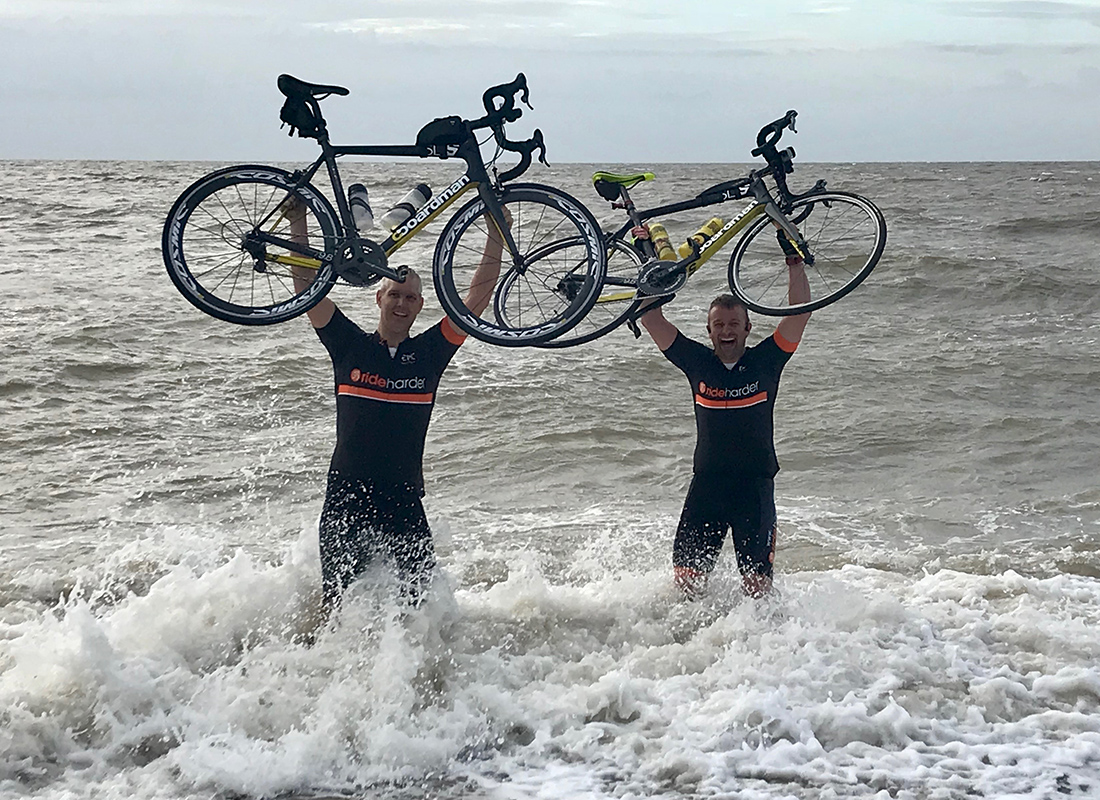 Good coffee as we know is a key theme for us cyclists and with the impending ride going through the night it was probably even more of a priority.  It wasn’t long before we hit our first obstacle on route to the start which was getting a decent coffee! The first garage seemed to have misplaced it’s advertised Costa machine and the second Wild Bean choice was unable to make the complicated “americano”!

The excitement of arriving for the start of the ride was overshadowed by the passing of “Patrick”. Patrick had been with Rob on this handle bars for a number of years and completed many challenges from coast to coast  and LEJOG however the trip to Dunwich on the roof of my car was one trip too far, Rob was obviously devastated.

After 52 days of no rain this obviously came to an end today and the heaven’s opened when we were supposed to leave but luckily for Trevor he had brought spare bib short’s, we however were set to spend the next 20 hours in the same kit, nice! 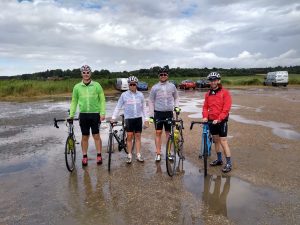 The journey down to London was supposed to be nice and relaxed although due to 20mph+ headwind this was not the case. Alistair being 6ft 6 obviously was unable to gain much of a “drafting” benefit behind the featherweight that is Trevor and found it a difficult bringing back memories of LEJOG!

We arrived at London Fields,  after being greeted by the lovely London car drivers, to the scene of a sea of bikes and drunk people! There is a great atmosphere with a real carnival feel at the start and it is far too easy to get carried away with drinking a few beers, we opted for the ginger variety to be safe!

Before we left for the return leg Trevor decided that he had better use the facilities which were never going to be good being public ones used by drunks & cyclists all day! It ended up being like a scene from Trainspotting, turned out bringing a spare pair of shorts seemed a very wise decision now!

The event is relaxed and no official start time so you can just leave with the group of your choice, the brighter the better! Getting out of London can be a nightmare but lots of sights to keep you entertained! There are plenty of  stop’s along the way so you will not go hungry or thirsty although easy to end up drunk by the end with endless pub stops along the way!

Now doing most other cycle events you end up getting sick of all the sugary gels and bars but that is where this is different, only during the Dynwich Dynamo do youfuel on burgers and hot dogs at the feed stations! Alistair was struggling with the lack of sleep at the halfway point and opted for a nap at every occasion even on the bike!

Arriving at the furthest easterly point at Sunrise (although a little later for us!) is a pretty special moment and the only time that you see so many bikes sunbathing on the beach! Another event/challenge ticked off the list and we all had a great timeCheck out the ride here, 225miles, 8000 cal, 14hours!