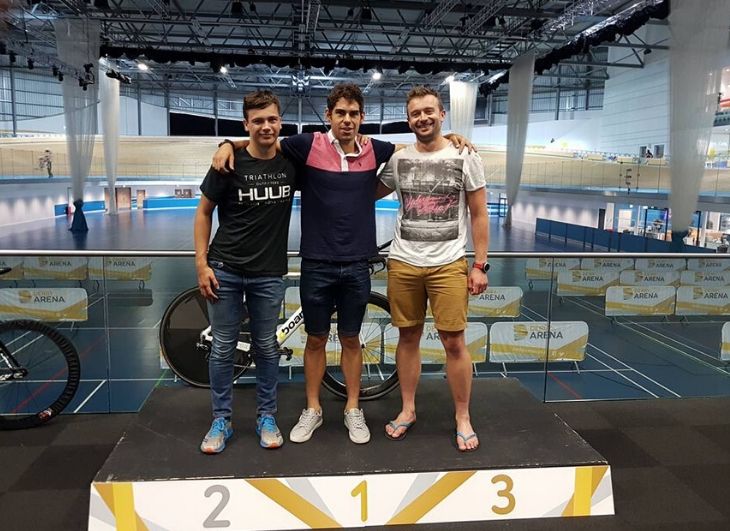 Being aero is one of the biggest factors to going fast when on the bike as long as power is not compromised. This is hard to monitor with many other external factors but riding on the track eliminates them and allows you to compare different positions.

I got invited to Derby Velodrome with Joe to do some testing for myself and he was wanting to check out his current positions. Now for those who don’t know Joe he is a great guy but pretty laid back so there was little urgency to leave so enjoyed a cup of coffee with him before packing up the car to leave slightly later than planned making sure we had no surprise guests in the car!

We arrived at the Veledrome only slightly late where Joel, who was also using the track with us, was waiting patiently.

Now our testing was not overly scientific but this still allowed us to see what did work and want doesn’t work and what positions are close to each other so was a really good guide. We basically completed 12 laps of the track from a rolling start, which totalled 3km.

The first task was to set a benchmark using the current position, which I completed in 5:05. The aim was kept the same gear/rpm and tried to maintain a certain power for all future runs. The power was not easy to maintain with the banking of the track but figure as long as it was recorded it would help us analyse the results after.

My main objective for the day was to test the Bell Javelin again the Kask Bambino and to try going lower on the pads to see if that was faster or not. It is difficult to give an exact number to the watts saved as each run was slightly different however what became clear to me looking at the results was that holding good form with my current position and using the Bell Javelin was by far the fastest position.

Going lower for me made me slower  but more importantly was more uncomfortable and felt physically harder to push out the power which was really useful to know and will save me worrying about “slamming” the front end. I can only think that this humps my bad more making me less aero.

Joe was missing his Dad who normally does his mechanical work so had to make the adjustments himself. To be fair aero cockpits are getting more and more complicated to work on and that is something to be aware of if you are planning on doing it yourself as the time soon goes on the track! Joe had 2 main positions to test and surprising the more comfortable position turned out to be the faster.

The journey home was a long one as I had to listen to Joe talk about his new favourite podcast “True Crime” which about the mind of serial killers and how they got caught, very odd!  All in all a good day, even though it was not very scientific it still showed up major differences and lots learned so would recommend it to others.